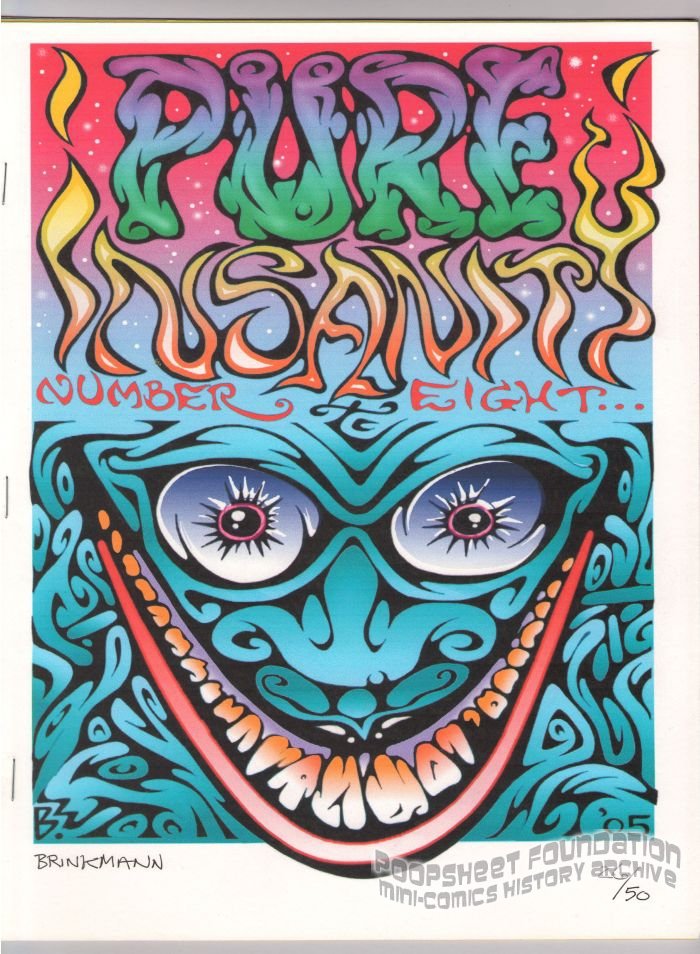 By 1979 the seeds of what became the “New Wave” of comix had been sown by low print run, self-published, alternative comix such as George Erling’s Yikes (1975) and Doug Bryson’s Capt. Retro (1977), among others. At the time I was working in a small print shop and decided to print a “comic” book of my own in the misguided thought that my “artwork” was worthy of being printed. In hindsight the likes of that first effort, Pure Sex #1, are enough to make me cringe and ask myself, “What was I thinking?” The answer of course is that I wasn’t thinking, I was speeding, and one reviewer likened my art to “Rory Hayes on PCP.” That didn’t stop me from forging on and recruiting others for artwork and then publishing two better-received issues of that title as well as some mini-comix and my magnum opus the 88-page Tattooed Paper (1982).

Pure Insanity was a title I started in 1982 as a way to kill downtime at the print shop by photo-copying my drawings and doodles in small “artzines.” The first four issues of Pure Insanity were part of that photocopying frenzy and were solo. With the fifth issue (1983) I included another artist, Macedonio Garcia, and printed it on an offset press with some color on the cover. The sixth issue included an excellent inside back cover by Michael Roden, from Thru Black Holes Comix, that I printed with colored ink by using the “split fountain” method developed in the sixties by the original psychedelic hippie paper the San Francisco Oracle. Pure Insanity’s seventh issue I printed while living in Austin, Texas in 1984, and working in another small print shop, but I only sent out a handful of copies to those who I was in contact with at the time. The remaining copies of issue seven I gave to a transient fellow I had met while living in a hotel there and told him to either sell them, give them away, or throw them away. I have no idea what he chose to do and never saw him or the zine again until 2005 when I spotted a copy of Pure Insanity #6 for sale on eBay by Mike Roden who graciously sent me a copy of both issue #6 and #7. Seeing these publications -- much of the contents of which I had forgotten -- made me want to continue the title with some of my newer artwork.

Written by and © Tom Brinkmann. Please do not republish without permission.

Search the Database Only

New at the Mini Mart

New at the Blog